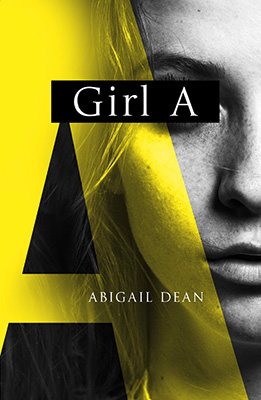 April’s book choice for our group was ‘Girl A’ by Abigail Dean.

‘Girl A’ tells the story of the Gracie children, seven siblings who endure much at the hands of their parents, in the ‘house of horrors’ they grow up in. Narrated by Lexie, otherwise known as ‘Girl A’ and the eldest sister in the family, the book starts in the present day, with the siblings all grown up. As the story progresses, the timeline jumps around historical events which gradually reveal what happened to the children and how they have moved on, or not, from their childhood trauma.

Some of our readers found the changing timeline and number of characters confusing while others liked this aspect of the book. Everyone felt the topic was realistically portrayed and, while not based on a true story, could identify real-life criminal cases that related to it.

This book earned a rating of 6.9 out of 10 from our group. Some members found the subject matter off-putting, with many saying it wasn’t the kind of book they would normally go for. Others found it an easy read but fairly forgettable once finished. Comments were made about the fantastic reviews the novel received and the superlative recommendations it carries from other liked authors – these drew readers in but ultimately felt like a bit of a letdown, with some readers anticipating more and being left wanting.

We discussed whether Lexie is a reliable narrator and discussed how differently the book might have come across if written from another viewpoint or in the third person. We looked at the relationships between the characters and acknowledged that the author isn’t graphic in her descriptions of what took place in the home. This leaves it open to each reader’s imagination and within the group, we had differing views on what we thought may or may not have taken place.

The ending itself is ambiguous and this divided opinion – some readers preferred the later chapters to the rest of the story while others disliked the vagueness. Overall, readers felt Lexie found peace, however you interpreted the closing chapter.

Some comments from our readers:

‘It was good to read but didn’t stay with me.’

‘The comments on the cover left me anticipating more.’

‘I found the present, late past and early past confusing…. but it had good characters and was fantastic.’

‘I’ve forgotten lots of it but enjoyed it.’

‘I felt very ambivalent about reading it in the first place.’

‘I kept reading it to get a resolution – it felt very realistic – voyeuristic.’